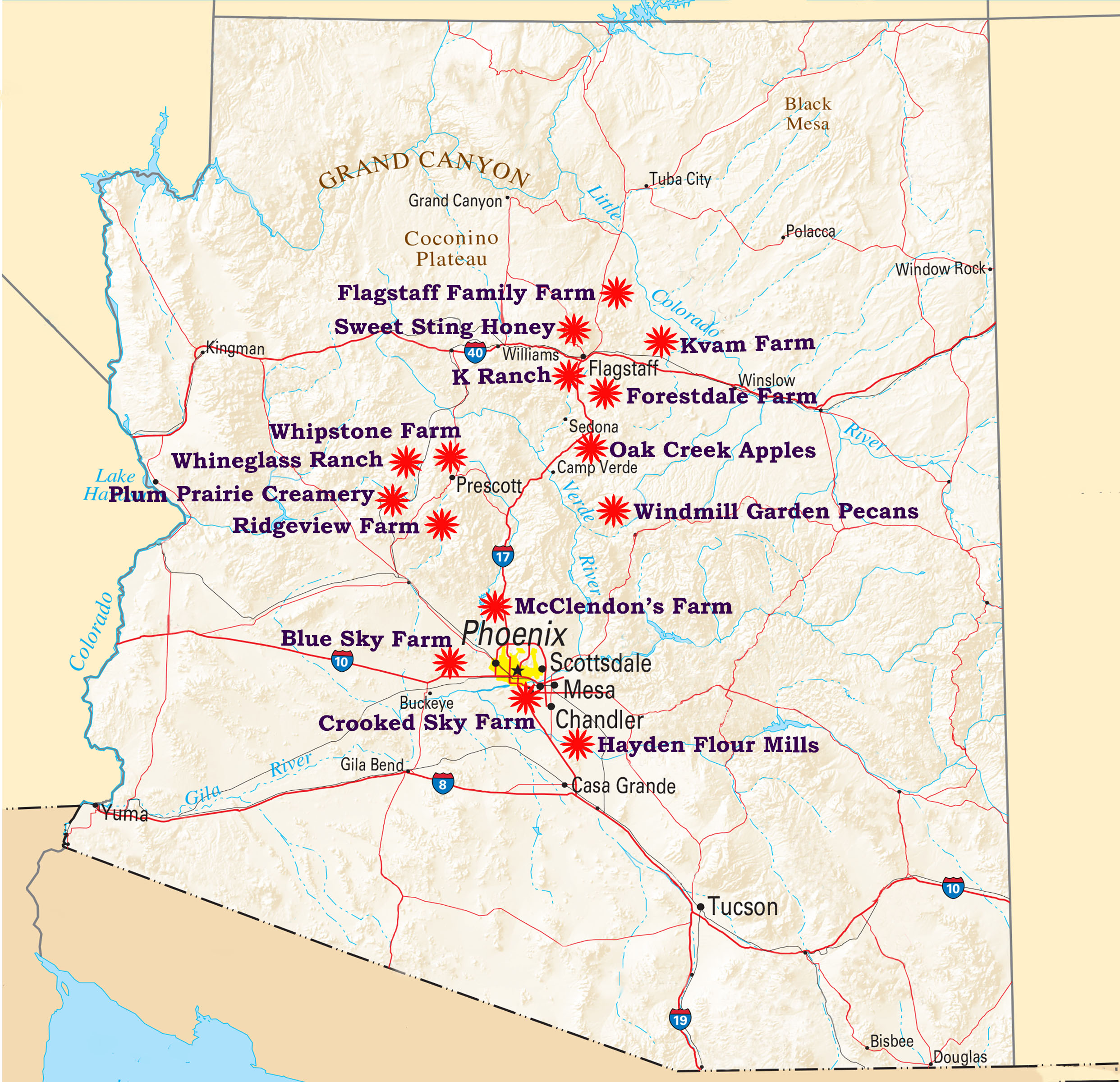 Flagstaff Family Farm was started by Tyler Allenbaugh and his wife in 2015. Their goal is to enhance Flagstaff’s local food economy by providing organic, locally grown, farm fresh produce to farmers markets and restaurants. Some of the organic produce that is grown here are salad greens, onions, tomatoes (over a dozen varieties) and apple trees. In addition to produce on the farm they have a variety of animals such as goats, pigs, and free range chickens.

Forestdale Farm is owned by Rylan and his wife Jaime. It is located in Flagstaff, AZ, is two acres large and they follow organic, ecologic and sustainable practices. Some of those sustainable practices include on-site composting, small scale aquaculture, cover cropping, rainwater harvesting, drop irrigation and mulching, bio-intensive planting, crop rotation, and hand cultivation and harvesting.

They supply organic chicken and duck eggs, turkey and produce. The animals are fed a diet of bugs/scraps from the farm and certified organic feed from the Flagstaff Buyers Club and are given ¾ of an acre to roam. They do not use hormones or antibiotics and they do not use debeaking, detoeing and pinioning practices.

K Ranch is owned by Larry Kallioski and their main product is chicken eggs. Located in Flagstaff, Arizona, the farm is two acres with ¼ acre dedicated as living space for his 80 chickens. That comes to about 240 square feet of space per chicken, on average. Their diet consists of 16-18% protein food with needed vitamins for good egg production, scratch grains and daily vegetable scraps. The animal waste that is produced is put into compost which is used in the garden. He does not use any hormones or antibiotics and does not use methods of debeaking, detoeing, pinioning or spur removal.

Kvam farm is owned by Kobly Kvam and their main product is organic chicken eggs. Kvam loves his chickens and plans on keeping his farm a small backyard flock. Kvam can be found in Flagstaff, Arizona on 0.5 acres of land with only 25 animals. They keep their chickens for two years and are fed Organic Big Sky layer mash, which is an MT flours and grain company. The chickens are given a living space of 10 feet by 30 feet. They do not use antibiotics or hormones and do not use the methods of debeaking, detoeing, pinioning, or spur removal.

Sweet Sting Honey produces honey locally here in Flagstaff, Arizona. Their most commonly sold raw honeys are the Flagstaff wildflower honey and the desert wildflower honey. They also have hives in Winslow, Arizona that produce Camelthorn honey. Besides here at the CSA, you can also purchase their honey at the Golden Hive and Beeswax and the Flagstaff Farmers Market.

Oak Creek Apples is located in Sedona, Arizona and is known for their quality and flavor. The unique mild micro climate of the Oak Creek Canyon and the abundant, quality water from the creek are some of the key components to their success. Their main products are apples and fresh pressed apple cider, however they also produce peaches, plums, pears and apricots when they are in season. Oak Creek Apples uses organic practices so there are no pesticide sprays, fungicides or chemical fertilizers used on the orchard.

Plum Prairie Creamery is located in Chino Valley, Arizona and was started two years ago by Erin Davis and his family. The main products on their dairy farm are raw cow milk, yogurt, cream and butter. To ensure the quality and safety of these products, the milk is cultured in a lab in Tucson each week. In fact, they are the only Certified Grade A Raw Dairy in the state of Arizona with fresh milk in glass jars.

Currently there are 10 milking jersey cows and 1-2 bulls on the farm, each one with their own name. All of their Jersey cows are A2/A2, which means the protein in the milk is the original protein, the healthiest and easiest to digest. The cows live out their lives in full on the farm but if for whatever reason some of the cows do not get along, they are sold to other farms. The milkers have 3 acres of fenced off land and together the bulls and dry cows have an additional 3 acres. The cows are bred naturally with a British white bull. There is a shelter available for them, but the animals only really use it during the freezing cold rain. As far as diet is concerned, they are fed non GMO alfalfa hay, native grassland, certified organic Modesto milling grain, apple cider vinegar and kelp. Hay and grass make up 97% of their diet and organic grain supplement makes up the rest.

No antibiotics or hormones are used on the cows. Erin is an herbalist and thus treats infections with natural remedies. To keep the cows clean, they are washed with organic peppermint soap.

Ridgeview Farm is located in Paulden, Arizona and has 13 acres in production. They have a total of 5,000 birds which consists of chickens, quails and turkeys. In addition to that they also sell eggs, lamb and beef. Their products can be found at Prescott and Phoenix farmers markets.

With regard to the chickens, their life span is 8 weeks on the farm and are slaughtered using the cone method, meaning the owner of the farm does it themselves. Their diet consists of natural elements of the Earth, a self-made supplemental diet of wheat, milo, corn, bean meal and organic vitamins/minerals. No antibiotics or hormones are used on the animals and there is no debeaking, detoeing, pinioning or spur removal. The animal’s waste is used for compost.

Wineglass Ranch is located near the Verde Valley area in Arizona. This ranch focuses on the care and ultimate production of beef. With that in mind, the cows are free range and their diet consists of range grass and orchard grass. The orchard grass is grown on the ranch and given to the cows during the winter months. This is unique because since all of the grass that the cows eat is grown on the ranch, their environmental impact is reduced considerably. On the ranch the animal’s waste is used in the garden and on the farm as fertilizer. The cows are killed 18 to 24 months after birth and are butchered using normal butcher practices. They are castrated, dehorned and branded with a hot iron.

Whipstone Farm is a family farm that began selling produce in 1995 and has been growing produce every year since. It is located in Paulden, Arizona and currently has 15 acres in production. They grow over 100 varieties of flowers and vegetables without using synthetic fertilizer, chemical pesticides or harmful chemicals. Besides here at the CSA, you can find their produce and flowers at the Prescott, Flagstaff, and Chino Valley farmers markets as well as through their own CSA.

Windmill Garden Pecans is located in Camp Verde, Arizona and was established and  is tended to by Frank Geminden and his wife Karen. Frank began is farming journey by growing vegetables for the market. However by the end of the first year he was nearly broke. That is when his neighbor offered him a few pecan trees and ever since then he has had a pecan orchard. Now they have an orchard of 175 pecan trees and about 600 feet of native blackberries along the Verde River. The orchard is a total of six acres and they do not use any pesticides or herbicides. If you are interested in learning more their phone number is 928-300-7589.

Blue Sky is a family farm that has been farming in Arizona since 1995. David Vose, the owner, started out as a young chef and now has a reputation for excellence not only in the farming sector but in produce and restaurant communities as well. He decided to change careers because he is deeply passionate about healthy, great tasting produce.

Blue Sky is a certified organic farm located in Litchfield, AZ. Using seed that is organic, non-GMO, and untreated, they grow over 180 different varieties of produce throughout a given season. In addition to produce they also have bales of alfalfa hay for purchase.

Crooked Sky Farms began in 1994 by Frank Martin. After seeing his father (a farmer who used industrial agricultural methods) die at a young age he was determined to farm using natural methods, before the days of toxic pollutants, genetic modifications and chemicals. Since starting his farming career he coordinated the largest CSA program in Arizona in 1999 and has become a NewTime Best of Phoenix 2012 winner.

The farm is located in regions all across Arizona such as Phoenix, Glendale, and Duncan, Arizona and spans over 420 acres. One reason for doing this is that Duncan provides a cooler 3500 foot elevation higher than phoenix, which allows Farmer Frank to provide produce year round to his customers. Some of the practices he uses are; heirloom seeds, natural care of the soil and crop rotation. He makes his own compost but also buys organic compost from a local dairy farm. He gets most of his seeds from Johnny’s Selected Seeds and the Baker Creek Company.

“Hayden Flour Mills is a family business that is devoted to making the freshest and most flavorful flours from some of the world’s oldest varieties of wheat.” All of their grains are grown by small Arizona farmers in areas across Arizona, particularly Phoenix and Queen Creek. It is then freshly stone milled on Sossaman Farms in Queen Creek, which is the farm that most of their grains are grown. Milling fresh flour gives it a much fresher, sort of stronger, flavor and aroma. Stone milling is when the grain is sheared into flour by rotating stones. This method keeps the integrity and nutrition of the whole grain. To maintain freshness, it is recommended that you keep the grains in the freezer.

All of their grains are herbicide and pesticide free, unbleached, non-GMO and do not have any additives. They sell a variety of grains, some being White Sonora Wheat, Red Fife, yellow corn, chickpeas, Farro, Hard Red Spring and golden durum. “White Sonora Wheat is the oldest variety of white wheat in North America…it is desert adapted and their farmers find that it needs less water than modern varieties.” This type of wheat is sold in type 00 flour, all-purpose flour and whole wheat. Red Fife is “a precursor to wheat and was eaten by the people of the fertile crescent more than 2,000 years ago. It has recently been rediscovered as a low-gluten, high protein grain with a nutty flavor and chewy texture.” This grain comes in bread flour and germ and bran. The yellow corn comes in polenta, grits, cornmeal and corn flour. Chickpeas are sold as whole chickpeas and chickpea flour. Farro is sold as farro berries and farro flour. The grain hard red spring comes in bread flour and germ and bran. Last but not least, the golden durum comes in semolina and durum flour.

McClendon’s Farm is a family farm run by three generations of the McClendon family. They are located in Peoria, Arizona (25 acres) and Goodyear, Arizona (68 acres) and are certified organic. Between the two locations they grow over 100 varieties of organic fruits and vegetables, dates, honey and bee pollen. For example, they grow rainbow chard, I’itoi onions, oranges, carrots, cabbage, sugar snap peas, and artisan romaine hearts. In addition to all of that they also create organic soaps. They sell to farmers markets in the Phoenix area and to restaurants in Phoenix, Tucson, Flagstaff, and Sedona.